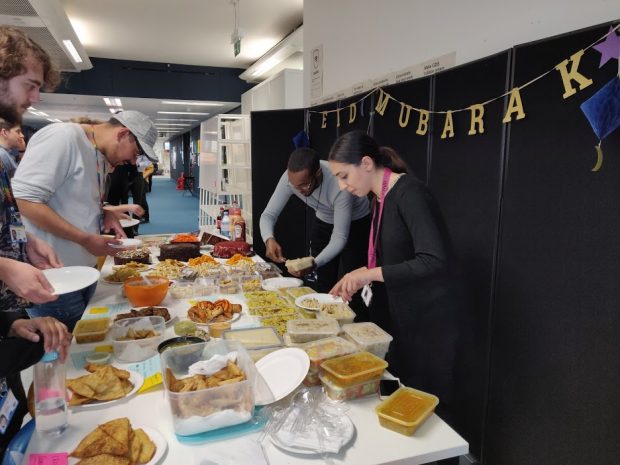 The Muslims at GDS community has now been going for a year. Established last Ramadan, it’s flourished into a great network, and over the last year we've done a range of different things: from Muslim technology talks to an Eid food event to hosting Muslim school girls for work experience opportunities. This year, however, things are different with remote working, but we still wanted to find a way to celebrate Ramadan and involve the wider GDS community.

In collaboration with the wider Civil Service Muslim network, we decided to host a fast-a-thon challenge, inviting colleagues to join us on our fast for the day.

The fast-a-thon was aimed at mostly at non-Muslim colleagues, irrespective of faith/belief, and generally involved participants fasting (abstaining from food and drink) a full day alongside Muslim colleagues, or skipping lunch. Participants were also asked to donate lunch money to one of our chosen charitable causes. The fast also involved abstaining from bad/negative thoughts, actions, and speech from dawn to dusk. We gave our colleagues a few options they could either:

We had people across the organisation join in, from senior leadership to new starters. We messaged back and forth during the whole day, sharing experiences, advice, and support. Below are some reflections from people GDS colleagues that took part.

Richard Towers, Lead Developer on GOV.UK, wrote a detailed reflection of his experience:

As a non-muslim, I found it interesting to think of all the families around the world waking up to share the pre-dawn suhoor meal together. It’s not an aspect of Ramadan I’ve thought about much before - I’ve always thought about the fast itself and the end-of-fast meals (which sound quite joyous). Usually when I get up in the middle of the night it feels like I’m the only person in the world awake - it was fun to think of all the other people in the houses all around doing the same thing.

I found doing the fast for a day really fascinating - it gave me an opportunity to really stop and think about what life is like for people during Ramadan - something I’ve only really thought about in a very shallow way before.

It was tough, but probably about as tough as I expected it to be.

I only did the version where I still drank water and I found that tricky enough! My son was very interested as he is learning about Ramadan this week from school. He was pointing out I should be giving up my bad habits (in his view eating cake and biscuits are top of my list). I was already somewhat in awe of the discipline required to fast for a month and am now only more so. I am super grateful for my cup of tea now.

Until I took part in this event, I did not know that fasting during Ramadan also meant abstaining from negative thoughts. Self-criticism is hardwired into my brain so this presented the biggest challenge for me. Before taking part, my Muslim colleague Syed shared some wisdom: save your energy. Not eating and drinking was difficult but working from home meant I had the luxury of not needing to move around very much and I realised that the biggest energy-consumer was definitely my negative thinking. As soon as I stopped dwelling on thoughts that did not serve me, my focus sharpened.  I would go as far as to say that I actually felt moments of serenity.  Bringing myself back down to earth though: the simple joy of knowing that I was going to break the fast in a few hours is a gratitude I won’t forget.

I definitely could not have done this without the support of my Muslim colleagues and others taking part. The camaraderie and kindness made me feel connected after a day of small challenges and I thought of how lovely it would be to break the fast with family, friends or neighbours. It has deepened my respect for my Muslim colleagues working during Ramadan - shoutout to my colleague Bibi who took part in a work quiz with extremely bad technical issues whilst fasting! I hope to share Iftar with them one day.

My main reflection was that some cultures or societies have lost that necessary pang of mortality, which is an altogether odd thought to have during a pandemic – perhaps indicative of the privilege I have. It made me think a lot of others who don’t have a choice whether to fast or not, whether to drink water or not. It made the moment we’re in immediately real. Those were good reflections to have, so I think I’ll try fasting again.

And then when I looked at the oneness and camaraderie that was thriving in the slack channel, it made me think: isn’t that what it’s all about anyway?

It's been interesting mostly as an observer. I didn't do the full experience - I know I get headaches from dehydration and caffeine withdrawal, so I ended up just going without food.

I loved that by sharing the experience with us, it opened up the opportunity to ask way more questions than usually might be considered polite.  Like most people here, I've been around people who observe Ramadan since I was a kid, but there's always the danger of making someone feel 'othered' by asking too much. So it was actually pretty unusual - and nice - to have people explicitly offering to answer questions.

It was great to make that connection and be mindful of our Muslim friends around the world. We also had our own mini-ummah here too which is pretty cool. Overall, great experience

The Muslims at GDS community are proud that GDS colleagues took part and would like to thank everyone for their participation. We feel a great deal of understanding has been built through this initiative and hearing reflections from everyone was special and it also helped to facilitate more conversation about Ramadan and our faith. We look forward to hosting the challenge next year and look forward to hosting an iftar in person to open our fast together.